TACTICAL CARBINE: ARE YOU GETTING THE MOST OUT OF THE MODERN LOW READY?

By Richard Blake
No comments

TACTICAL CARBINE: ARE YOU GETTING THE MOST OUT OF THE MODERN LOW READY?

If the Low Ready were an ice cream, it would be vanilla. It’s just boring! Hey, we’re all thinking it, I just said it out loud. But guess what? Boring is fine. Boring, in this case, is also fast. And fast can be … cool, right? 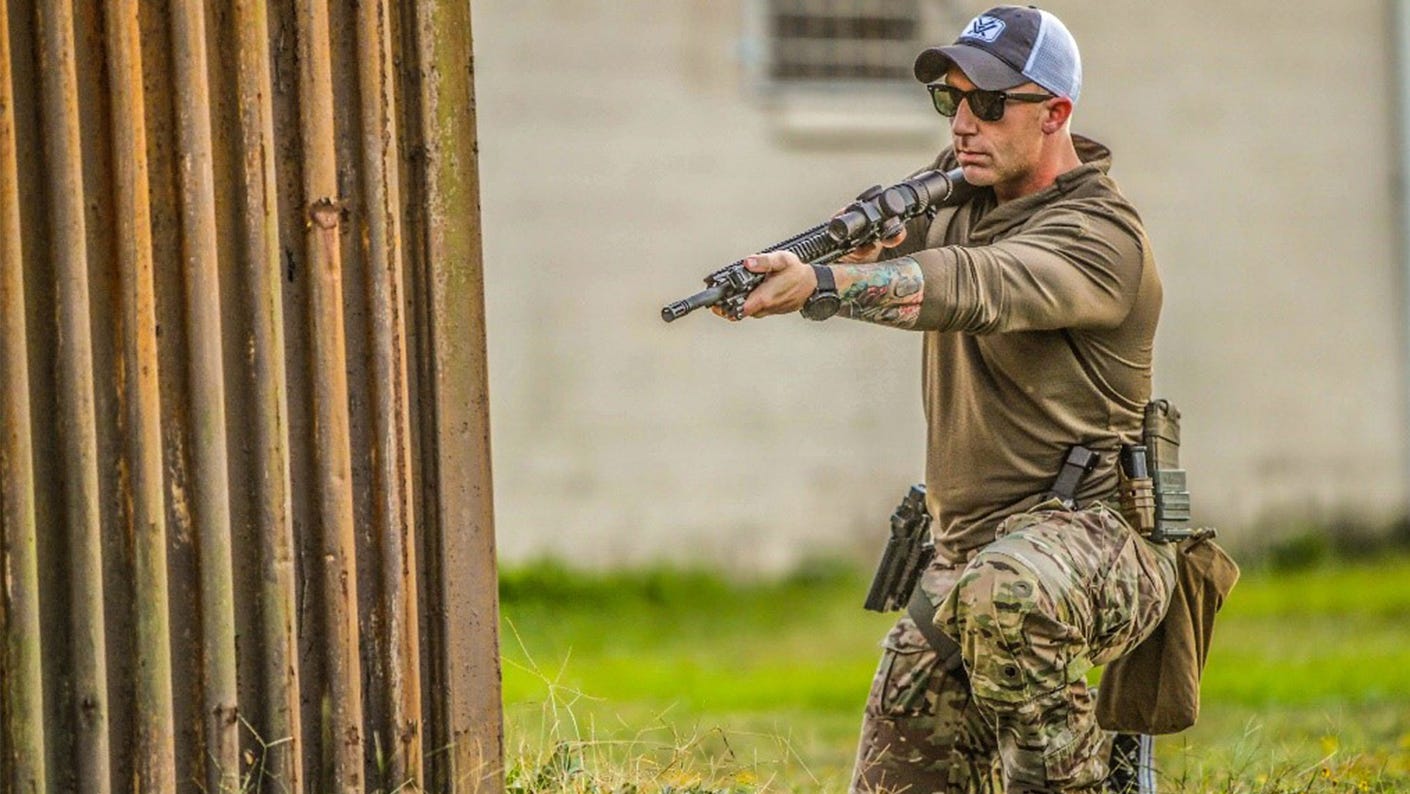 In today’s social media age, it’s easy to get swept away with the latest and greatest gimmicks, especially in the world of shooting. Unfortunately for us, this often comes at the cost of overlooking tried and true methods that could seriously up our shooting game.

One of these methods is the Low Ready, more commonly known in the tactical world as the Depressed Muzzle. And no, I don’t really think it’s boring. In fact, I think it is one of the most important skills to have in the world of tactical and competition shooting! Because, whether you’re a competition shooter, a SWAT officer, or an armed civilian, the shooting process is THE same.

That’s right, we all shoot with our … eyes. Before you apply any other shooting fundamental, you must first OBSERVE the target and PROCESS the information before the signals are ever sent to that slick blaster in your hands.

Okay, so I know what you’re thinking. Sure, the cognitive side of shooting is important, but how does it relate to a simple ready position? What so many people overlook, especially in a dynamic environment, is a ready position is as much about your head and eyes as it is the position of your weapon!

The more efficiently we drive the rifle into the middle of the cognitive process, the faster our rounds will find their targets. And that’s the beauty of the Depressed Muzzle; it allows the shooter to soak up critical information without sacrificing speed and functionality.

What is the Depressed Muzzle?

It’s important to make the distinction between the modern Depressed Muzzle and the classic version of the position. You know the one, buttstock lying flat on the shoulder and muzzle pointed in a safe position at the feet. I call it the “Classic Not-Ready” position.

The main issues with the classic position are its lack of speed and tendency to cause the shooter’s eyes to follow the muzzle line while moving, limiting the ability to observe and process information. Unlike the classic version, the Depressed Muzzle has one goal; to get into action quickly.

One of the great things about the position is its versatility, enabling the shooter to modify its implementation depending on the operational environment. The three main variations of the Depressed Muzzle are:

The Depressed Muzzle has the shooter slightly depressing, or lowering, the rifle muzzle so the shooter is looking just over the optic. The muzzle height itself can be adjusted to the situation and the distance to the target.

This position puts the shooter in position to fully observe and process, and limits the distance the rifle must travel to make a shot. 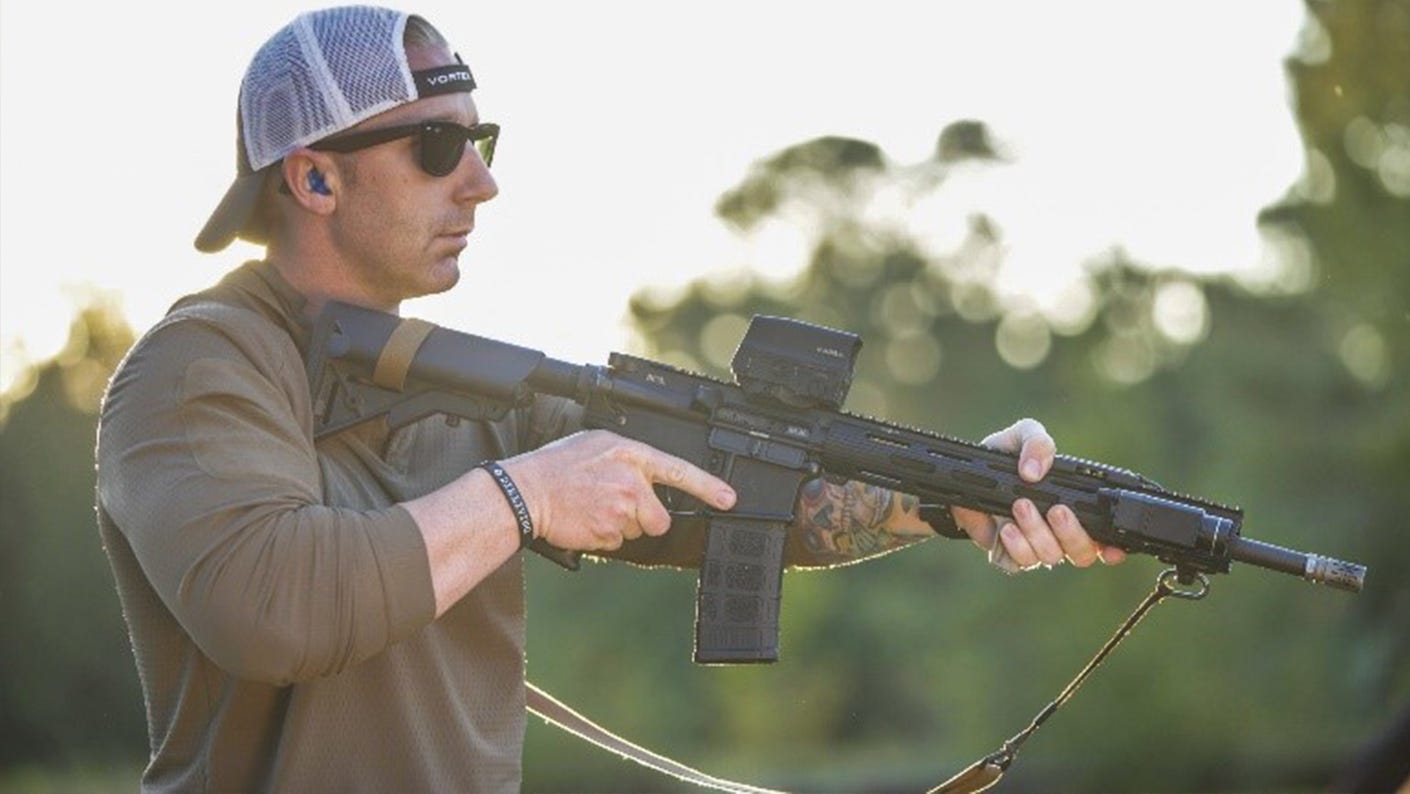 In order to properly implement the Depressed Muzzle ready position, start by doing the following:

Once you’ve done these steps, you should be in a good Depressed Muzzle position.

Once you’ve gotten into this position, your head and eyes are free to process information. To engage a target, simply drive the muzzle up until your optic enters your field of vision and you see what you need to see to make the shot. 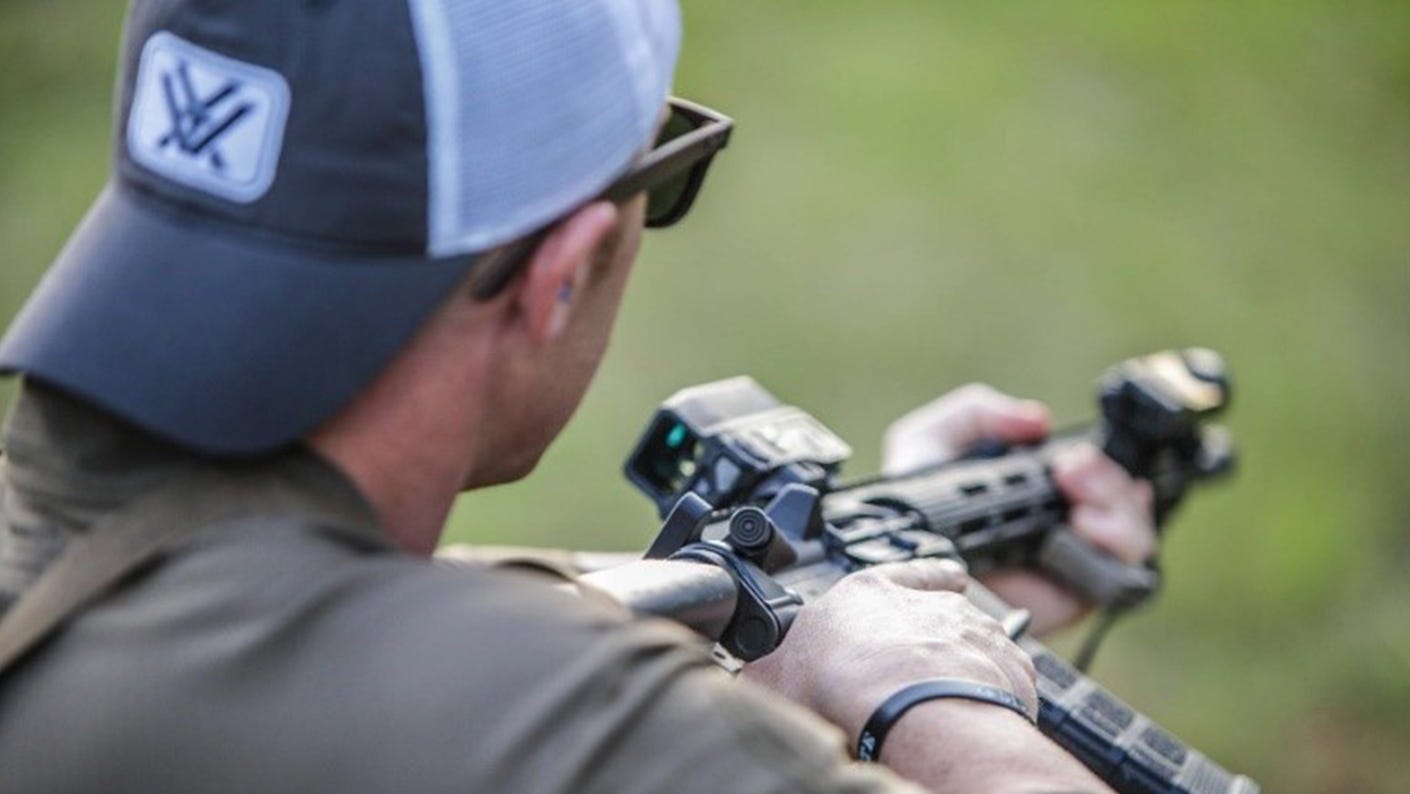 With the Modified Depressed Muzzle, the initial body positioning remains the same.

However, instead of lowering the muzzle straight down until your eyes are looking over your optic, this modified version simply rotates the rifle, so the optic has moved out of your field of vision.

This slight variation allows you to keep the muzzle high while still maintaining good situational awareness.

In order to properly implement the Modified Depressed Muzzle, assume the same body position as before. Then: 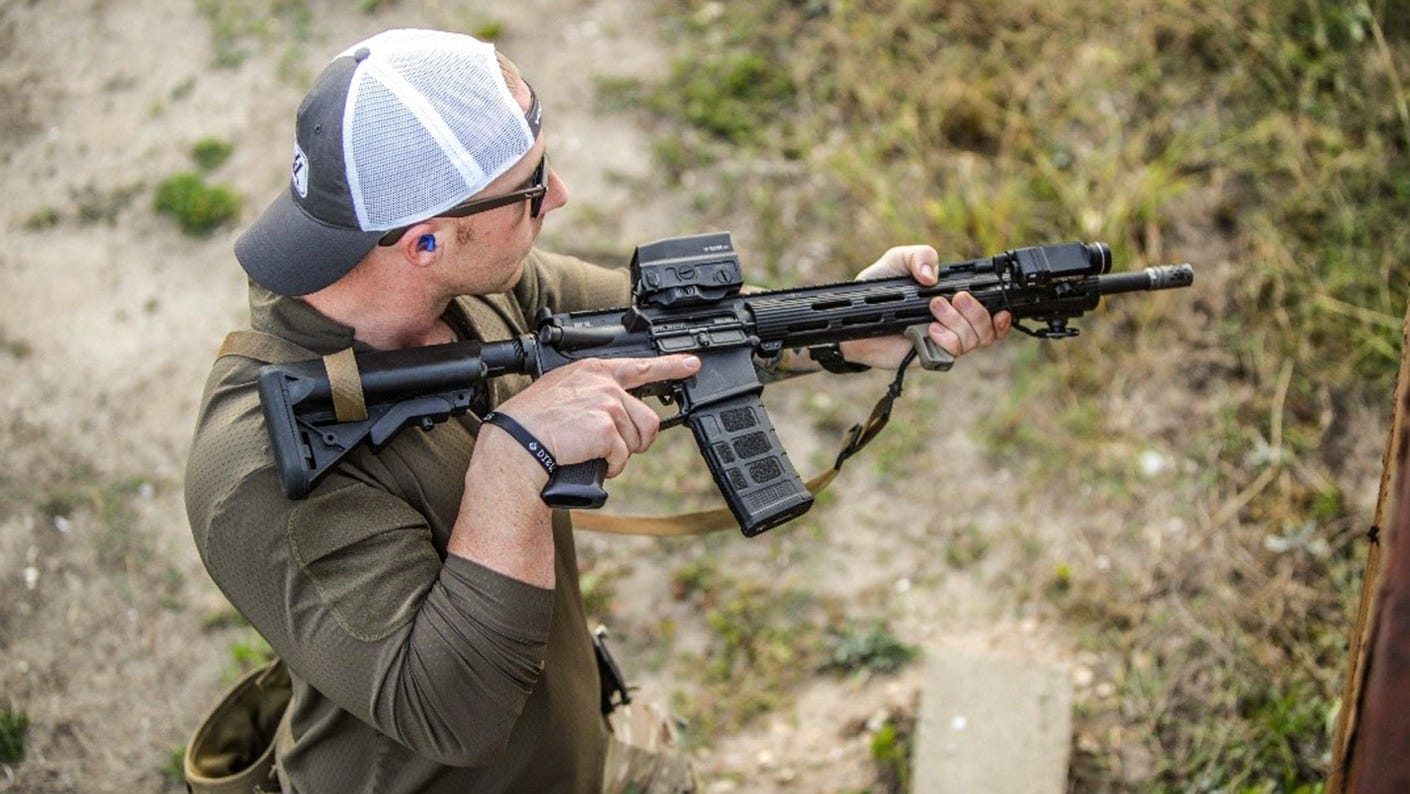 Unlike the previous two positions, the Compressed Muzzle has a very specific application; close-quarters shooting. With this position, the rifle is not shouldered at all. Instead the rifle is compressed by resting the buttstock over the firing shoulder.

In order to properly implement the Compressed Muzzle, assume the same body position as before. The points of performance remain the same. Start by:

When utilized in a CQB environment, the Compressed Ready allows the shooter to move in and around obstacles where using a Depressed Muzzle or Modified Low Ready isn’t feasible, such as when entering doorways or panning in narrow hallways. 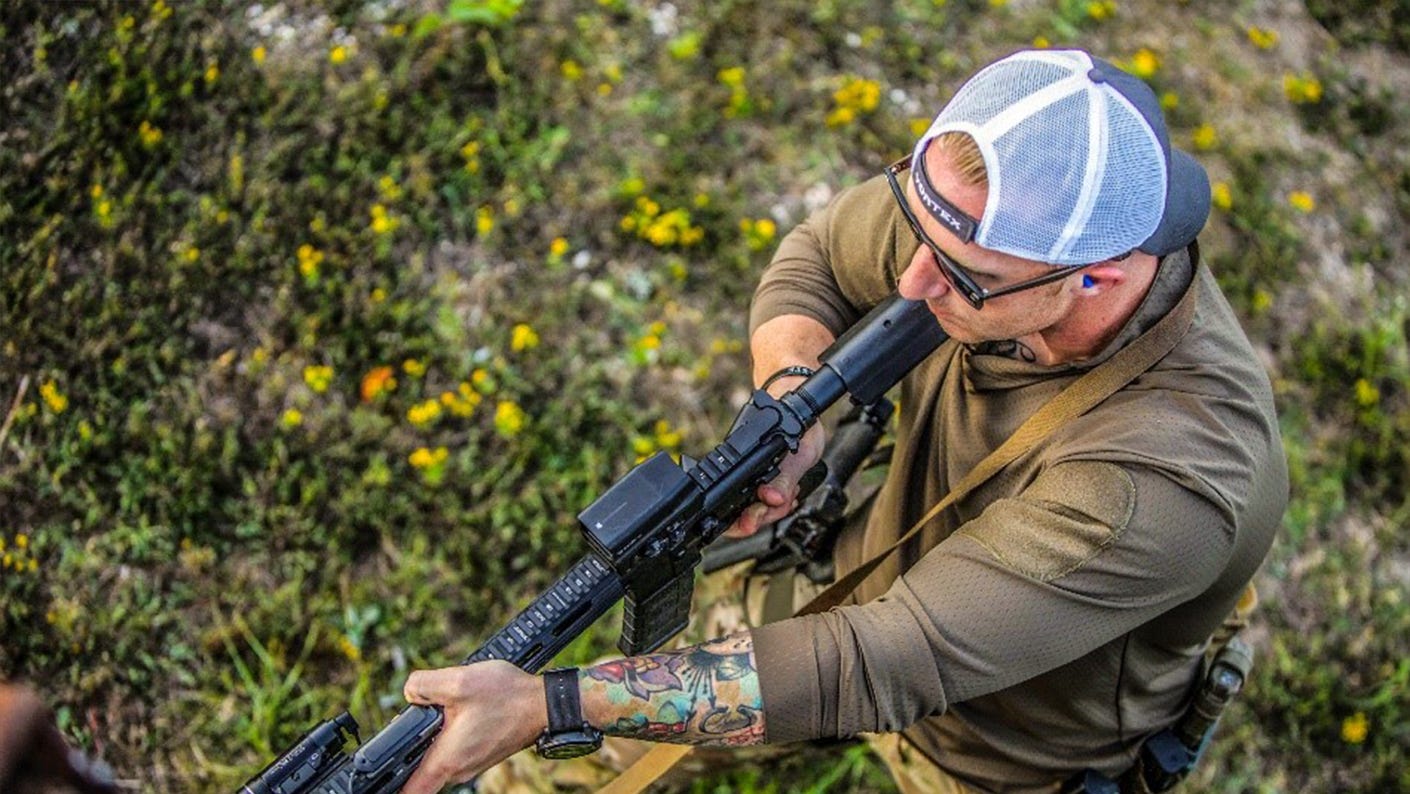 Having a Bad Stance. Very often I see shooters using a hyper leaned-in aggressive stance. Yes, there is a time and place for aggressive stances, and they work great on a flat range ... until you throw movement into the equation.

Bottom line, if your stance doesn’t facilitate both movement AND a strong base, it’s a bad stance. I recommend striving to keep an upright torso with only a slight lean. From there, you simply adjust your base to the action being performed (standing, running, crouching, etc.)

Bringing Your Eyes to the Optic. Your eyes have already seen the target and your brain has analyzed it ... so why do so many of us crane our necks to meet the rifle as it lifts? It’s not faster. In most cases it forces our eyes off the target, and we must relocate and reprocess. Stop working against yourself. Instead, keep your head up and bring your optic to your eyes. Introducing the rifle and optic into our cognitive processing is exactly why reflexive optics were designed.

Clearing Through Your Optic. This is most common in close-quarter environments where the shooter believes he can make up time by already having his head down behind his optic.

Being able to scan for threats, process the terrain, and see targets at depth all revolves around being able to observe, process, and act. 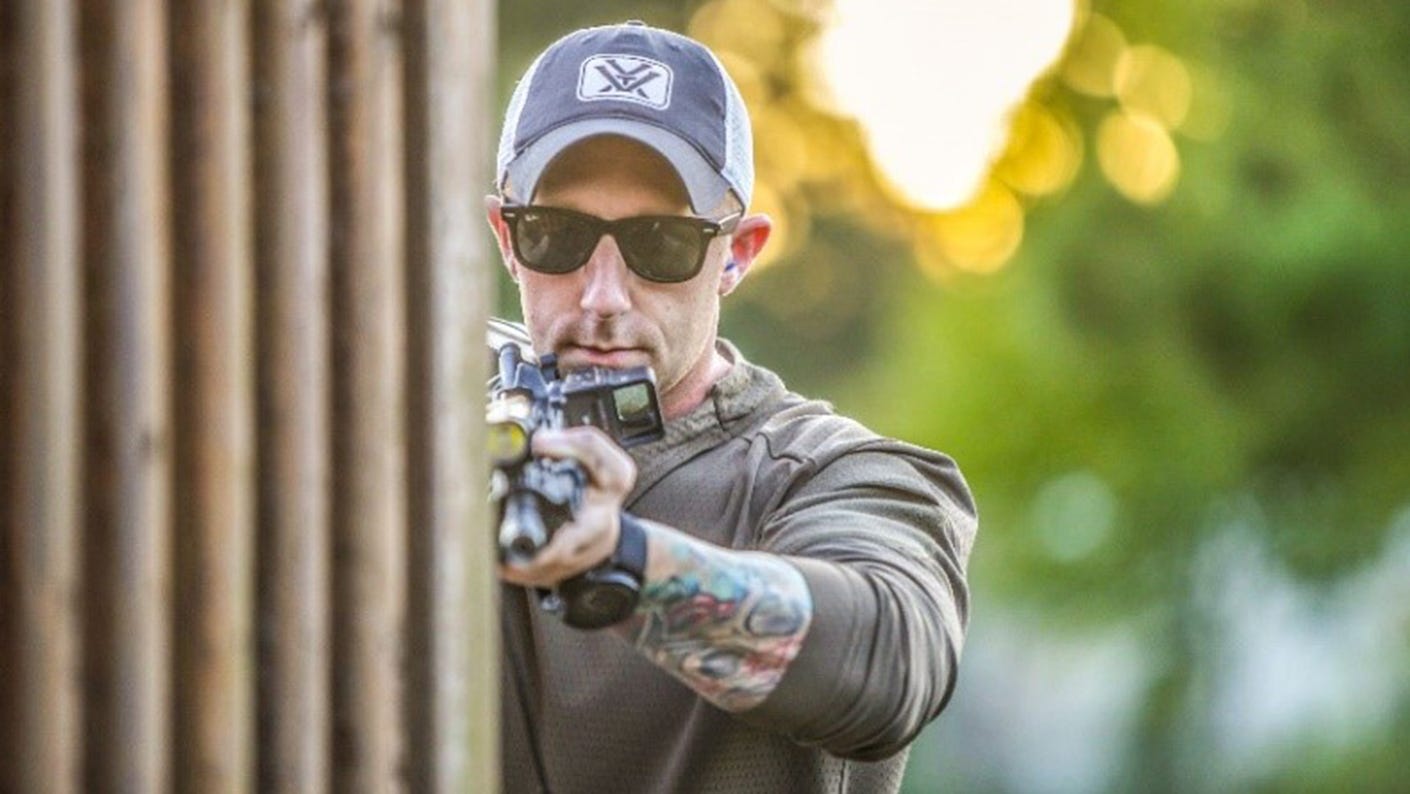 So next time you're at the range and decide to dust off the ole blaster, run through the methods outlined above. Practice them, perfect them, and become a master of the basics.

Richard Blake is an avid shooter who enjoys competing in local shooting competitions and training to become a better version of himself. He has a background in military and law enforcement and is an FBI certified firearms instructor who has attended multiple shooting and tactical courses.