By Pete Schreier
No comments

There’s a lot of reasons you might choose to transition from iron sights to a red dot for your pistol. As your eyesight degrades, red dots become easier and faster to acquire, and there are plenty of holsters that allow you to carry your EDC pistol with a dot attached. But making the transition from shooting irons to shooting a dot can be tricky, especially if you’ve trained your whole shooting life on irons.

We asked Peter Schreier, one of our Vortex EDGE firearms instructors, for three tips on making the transition easier, so you can make the move to a dot without losing your hard-earned speed and accuracy.

1. First things first: Red dots are going to make you see better, not shoot better. They won’t cover up deficiencies in your fundamentals: If you flinch, if you have poor trigger control, a red dot is not going to fix that. But, of course, that’s true for all optics, and red dots do three things real well: They keep your eyes off your gun and on your target; they work in all lighting conditions; and they let you aim more accurately at speed. That said, yeah, there are some cons. There’s a learning curve to it, but once you get over that curve, the sky’s the limit.

It takes practice to move from fixed sights to a red dot, but the benefits can definitely outweigh the extra time at the range.

2. The key is to start with presentation. We’ll just assume you’ve got your optic mounted according to manufacturer’s suggested specs and zeroed. Start at close range, so you’re not worrying so much about precise dot placement. Begin in your high, compressed ready, then extend your arms and get your dot on target. Especially for guys who’ve learned on iron sights, you’re going to spend some time struggling to find that dot. You’re going to think to yourself, “No way this is faster than irons.” But here’s some bad advice you need to ignore:

Get to the point you can find your dot easily, then add in dry firing. And the key here is you should be pulling that trigger right when your dot is on target. Don’t get fiddly with a dead-center hold. Also, a red dot gives you a lot of information, so keep your eye on your dot during your follow through. Is it moving all over the place? Is it showing you a little flinch? 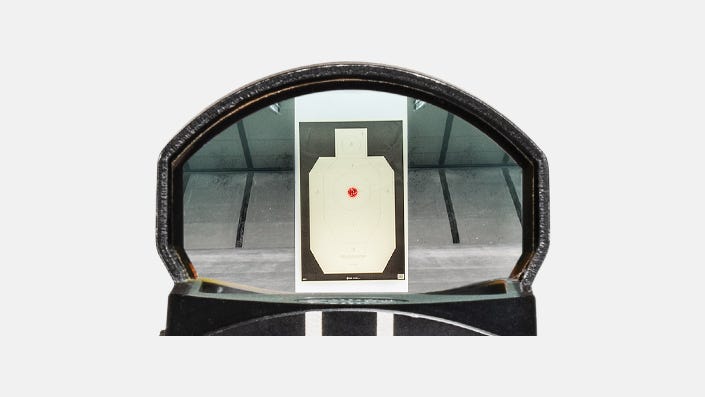 Let your dot show you more than just the target: Pay attention during your follow through to make sure you’re not flinching, or moving off point-of-aim.

3. Here’s a little secret sauce for anybody who struggles to find their dot right away. (I learned this one from Mike Pannone and it just plain works.) Make sure your pistol is clear and you’re working in a safe location with a solid wall as a backstop. Go into a room in your house you can make pitch dark and turn off the lights. Now, do the same thing: Start in your high, compressed ready, extend, and find that dot. Much easier, right? Kind of takes the guess work out of it. From there, move into some live fire. You’ll find a red dot lets you keep your eyes on the target, even as you move or the target moves.

If you’re interested in learning more about red dots on pistols, check out our 10-minute talk on “Red Dots on Pistols.” Got any questions, feel free to leave them in the comments below.