If the idea of putting rounds on target at 1,000 yards gets your shooter’s heart beating, take a moment and learn about one of the most complex and challenging shooting sports out there: F-Class. With a variety of calibers and equipment, F-Class competitors battle wind, mirage, and about a million other factors big and small. But be prepared: F-Class shooting is the deepest of dives into the nerdy side of marksmanship.

With math, careful preparation, and a lot of nerve, these “mad scientists” can put 20 rounds inside of five inches at 1,000 yards. Here's a crash course in some of the terms and concepts that make F-Class so exciting. 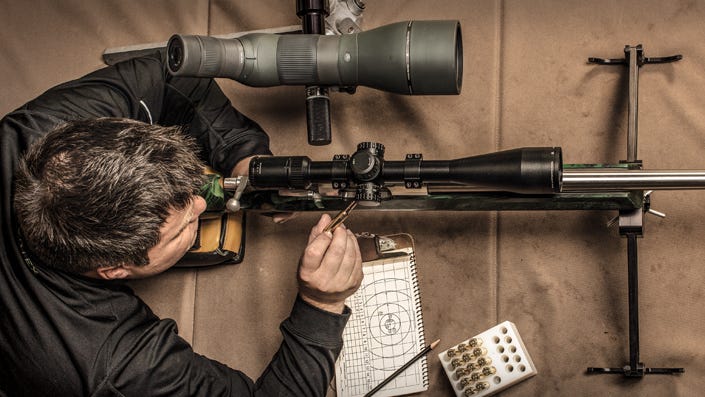 You gotta’ be F’n kidding me…

Here’s a question for you: After you’ve fired a round, where in the bullet’s flight will wind have the most impact on its final trajectory? If you guessed at the end, when the bullet has slowed down, you’d be just like a lot of us: Dead wrong. It’s actually the incremental change as your round leaves the barrel, early in its flight, that causes the greatest change downrange.

Okay, buckle up for this one: When you shoot, your barrel moves in the shape of a sinusoidal wave (like in physics class.) Shooters at the highest levels can use that motion to maximize bullet flight. No matter how precise and exacting you are in reloading for competition, your rounds will never have the exact same velocity. Here’s where it gets incredible: By tuning your barrel, you can ensure faster moving rounds leave the barrel before it gets to the top of the wave shape. This imparts a flatter trajectory to the round. Slower rounds, though, will leave when the barrel is at its highest peak in the wave, giving them a slightly upward trajectory, which can compensate for their slower velocity. (Think about the arc you put on a thrown football to make it fly farther.) Mind. Blown.

Want to get inside the mind of an F-Class champion and learn more about this growing sport? Check out our podcast featuring Ian Klemm, one of the top F-Class shooters in America. Already hooked on F-Class and looking for the perfect optic? Check out the Golden Eagle® HD, and start your climb up the podium.