Breaking Down the Gutless Method

By Corey Jacobsen
No comments

Breaking Down the Gutless Method

It usually doesn’t take more than a few seconds after pulling the trigger on a successful hunt for someone to state the obvious: “Now the work begins!” While there can be months of hard work leading up to a hunt, it’s often the time directly after the shot that turns out to be the most difficult. The tasks of processing and packing are what typically lodge in our memory as being the most challenging aspects of the hunt - especially if we aren’t prepared.

Time can be a precious commodity – particularly during the early parts of the season – when it comes to field dressing a big game animal. The steps of gutting, skinning, quartering, and deboning can be quite daunting, especially on larger animals like an elk. This process can literally take several hours for a single hunter. Being efficient at this task can ensure your hunt – and your meat – doesn’t get spoiled. 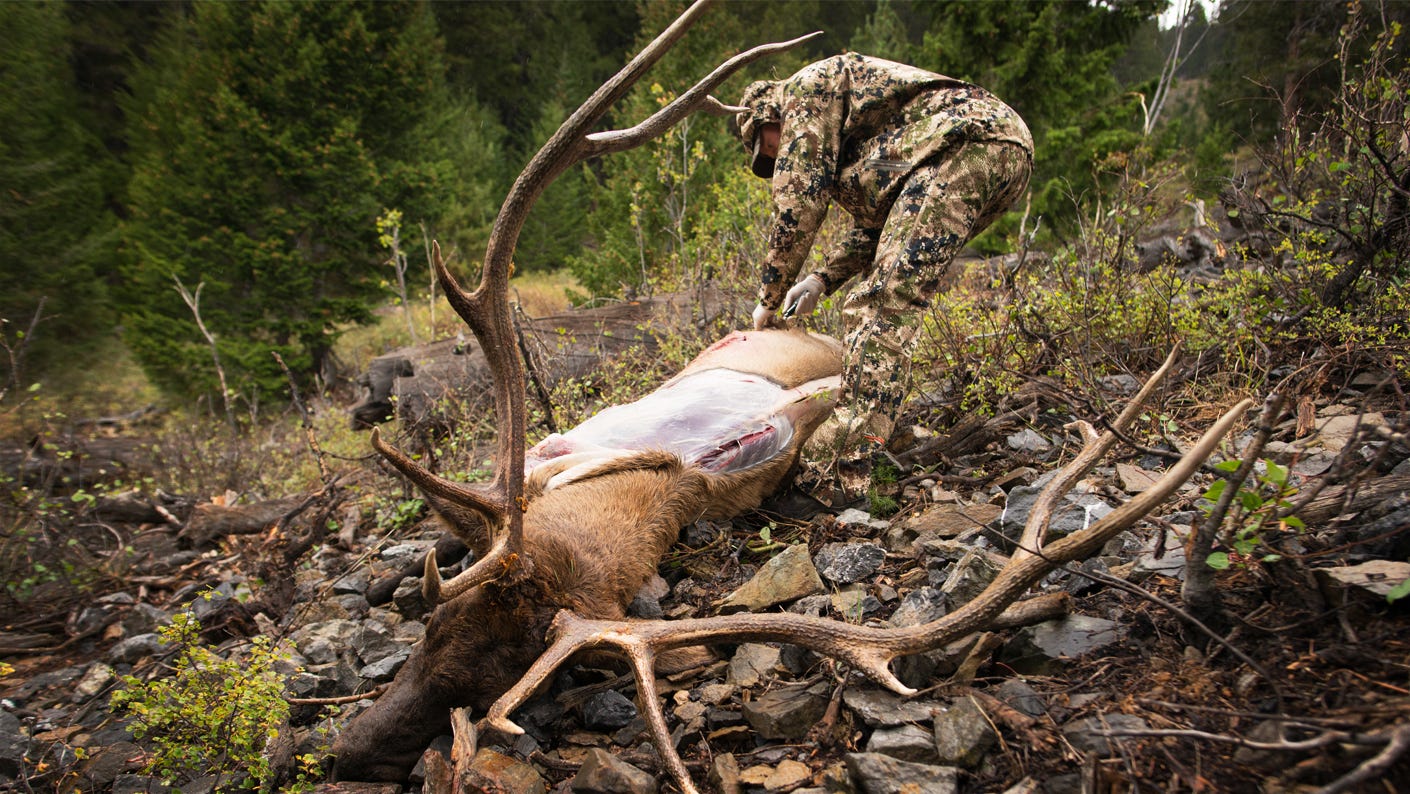 The Gutless Method works on any big game animal, not just elk.

Over the last few years, the field dressing process known as the Gutless Method has become increasingly popular. There are two primary reasons for its popularity – it saves time, and it saves a mess. The Gutless Method allows a hunter to completely break down an animal without ever opening the body cavity. This can save 10-15 minutes (or more), as well as keep the fresh meat from being exposed to the internal organs (i.e., guts). Using this method, every scrap of edible meat is still salvaged from the animal. Here is a quick breakdown of the Gutless Method:

1. Get the hide off. With the animal lying on its side, skin the hide off the entire exposed side from the knees to the backbone. This leaves the neck, front shoulder, ribs, hind quarter, and backstrap exposed. NOTE: If you are planning on a shoulder mount, you’ll need to adjust your skinning process to accommodate those needs.

3. Remove the rest of the meat. With the quarters removed, the neck meat, brisket meat, rib meat, etc., are all exposed. Remove these sections of meat, along with the backstrap. Have quality game bags readily available to place the meat in as soon as it’s removed from the carcass. This will ensure your meat is free of flies and dirt, and allow it to cool rapidly. Hang the quarters and meat, or arrange such that the air will be able to circulate around the meat to expedite cooling.

5. Repeat on side #2. With all meat removed from the first side, pull the hide back over the carcass and roll the animal onto its opposite side. Repeat steps 1-4.

The Gutless Method allows hunters to accomplish the task of field dressing their game in a shorter amount of time, and with less mess. It works well, on a smaller scale for whitetails, too. For more detailed instructions, check out this video, and visit elk101.com for even more tips.

For 7-Time World Champion Elk Caller, Corey Jacobsen, there is nothing like the high-country in mid-September. Finishing in the top 5 in the Professional Division at the RMEF World Championship Elk Calling contest 14 times in the past 15 years, he has become one of the most sought-after resources for elk calling and elk hunting instruction in the nation. In 2013, Corey was also named the RMEF’s ‘Champion of Champions”.

Corey’s passion for elk hunting also led him to create Elk101.com, a website devoted to elk hunting education, instruction, and entertainment. In 2014, Corey sold Elk101.com to Camofire.com to focus his efforts solely on Extreme Elk Magazine. Now living in Boise, Idaho, Corey and his wife, Jennifer, have three children – Isaac, Jessi, and Samuel.