By Josh Kirchner
No comments

What a Call Can Do

“That’s either a black cow or a bear,” my friend said to me, as he looked through his optics. Bears have a certain walk that is unmistakable and once this animal moved, there was no denying we were indeed looking at a bear out for an evening stroll and a bite to eat. There was about an hour of light left and I needed to cut the distance quite a bit if my hopes of arrowing this bear were going to come true. 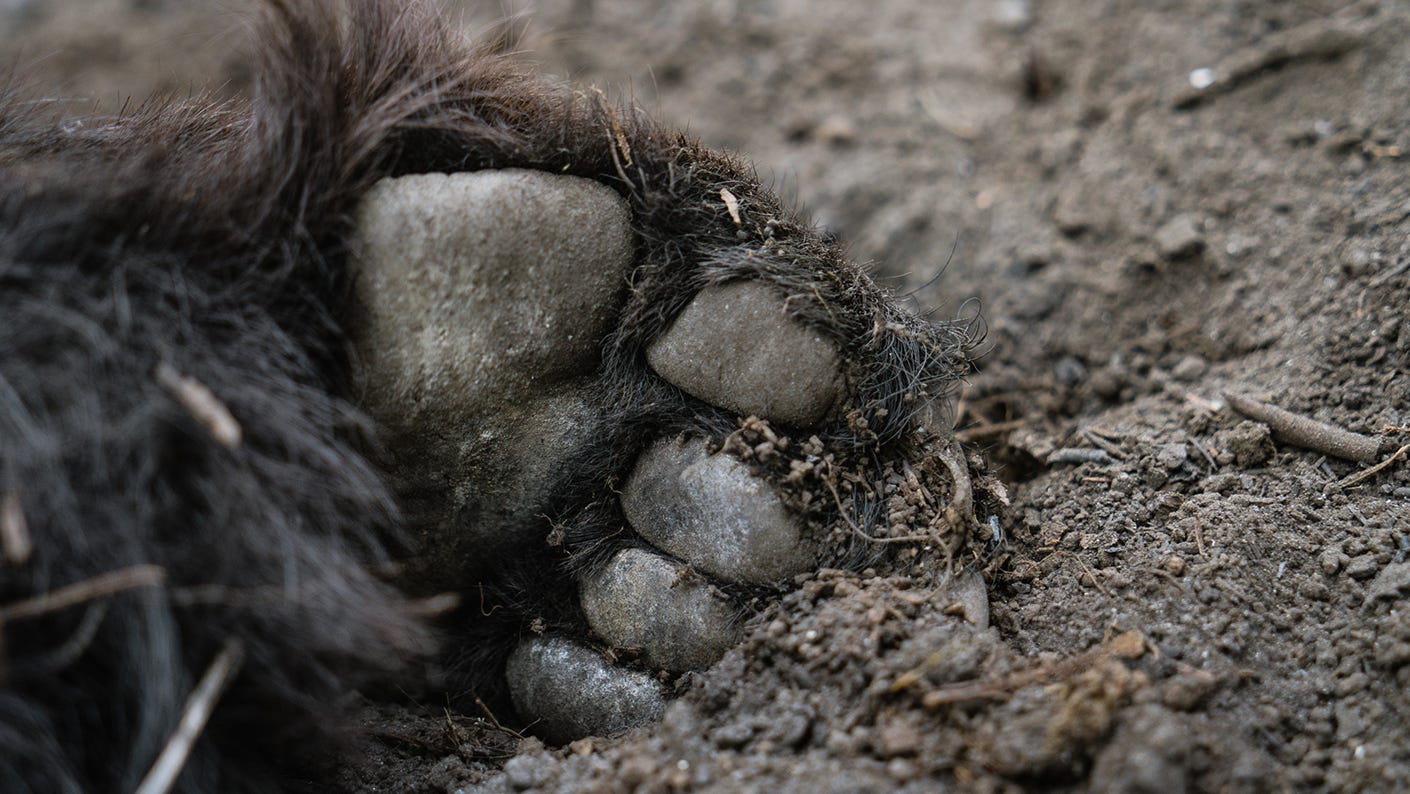 Before I knew it, I was on the same hillside that we last saw the bear. Then my buddy texts me and tells me the bear actually passed beneath my position and that I should go back. After a mad dash back the way I came, I quickly picked up the bear walking up the opposite side of the drainage from me. 300 yards separated us and he was moving away. My very first instinct was to grab my predator call in hopes of bringing the bear to me. Subtly, I whined through the call. The bear stopped in his tracks and looked up in my direction. It didn’t take him long to start running towards me.

Hunting Black Bears is growing in popularity each year. It’s for good reason too. The opportunity is far and wide, it’s a fun hunt (especially in the spring, when no other big game seasons open), and they are mighty delicious. There are a few proven ways of hunting black bears, with the most common being spot and stalk, sitting bait, or running hounds. These methods hold their own set of challenges and excitement.

There is another exciting way to hunt these amazing animals though. A way that sets the men and women apart from the boys and girls. Most folks that hear “predator calling” in conversation immediately think about coyotes, fox, and bobcat. Personally, I think of black bears. The concept of ringing the dinner bell for a hungry bruin was first introduced to me by a mentor of mine down here in Arizona. The stories he told so captivated me hook, line, and sinker that now, I never go bear hunting without a call.

Is Predator Calling Bears Right For Me?

There’s a story that mentor told me, that I can never get out of my mind. He was archery hunting for bear here in Arizona and was trying to call one into range. Before long, he had a bear coming up the hill to investigate the sweet song of death echoing through his canyon. My friend drew his bow back once the bear was at 10 yards and wasn’t covered by brush. His release malfunctioned and the arrow went sailing off into yonder. As tears rolled down his cheeks, he was able to nock another arrow and put it through the bear’s chest at mere steps. 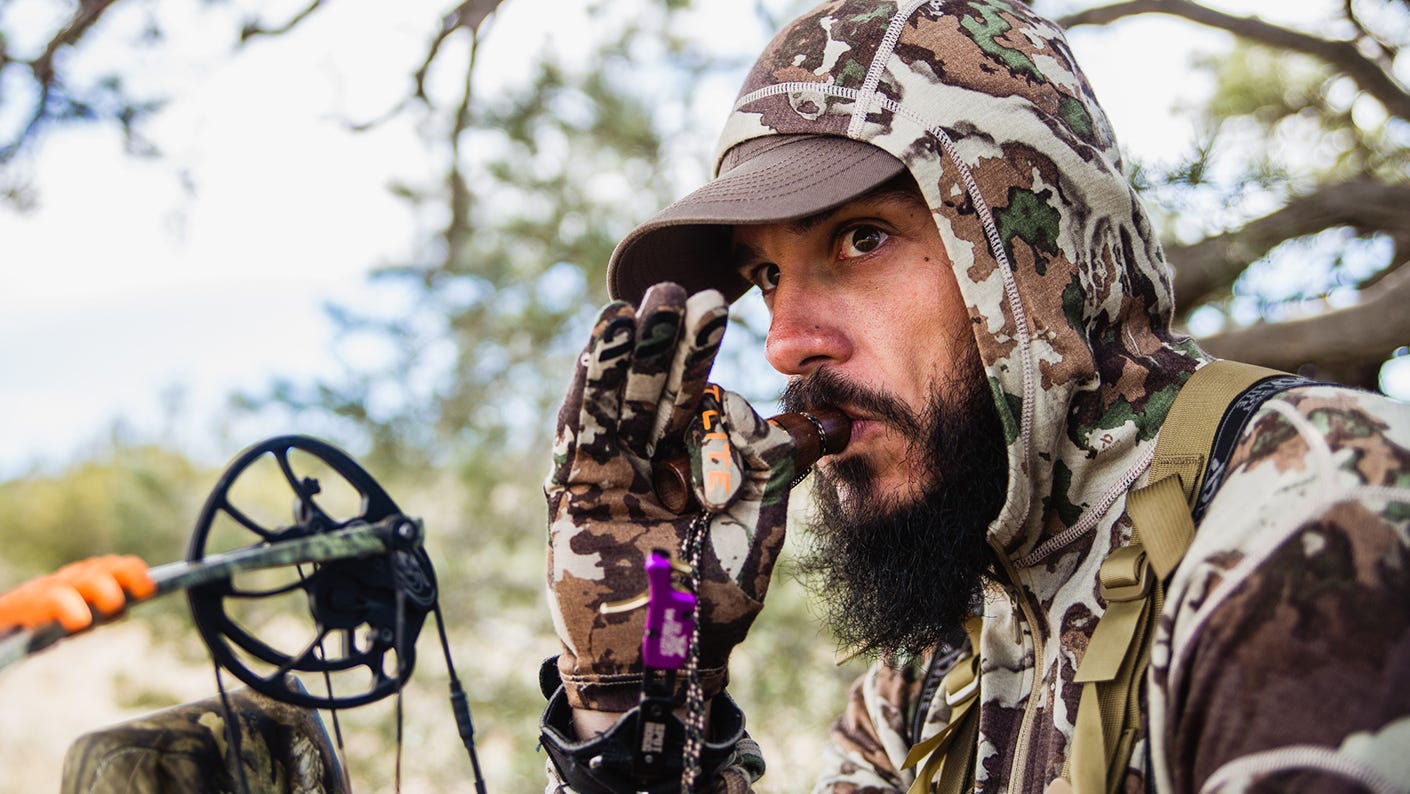 Predator calling for any animal brings a pretty constant flow of adrenaline with it. When you sit down and start calling, you’re literally asking the predators in the area to come “finish the job”. The point of a bear call is to make a bear believe there’s an easy meal close by. Sometimes, they come running and sometimes they come in sneaky, but both have the same intentions. I’ve called in plenty of varmints through the years and it is nothing compared to calling in a black bear. A bruin offers a different level of adrenaline rush entirely. For that reason, this stuff isn’t for everyone, and that’s totally OK. My brother for instance HATES calling for bear. I mean, I get it. Remember, they are coming to finish the job.

How Does Someone Go About Calling Yogi?

So, if you’re still interested in this “calling- for- bear” business, let me help point you in the right direction! Calling for bear involves a lot of patience, your full attention, and plain old persistence.

The first thing you’re going to need is a predator call. There are calls specifically designed for calling bears, but a good old fashion rabbit or fawn in distress will do the trick. There are hand calls and electronic calls. I personally don’t put a lot of stock into electronic calls for bear. They absolutely work, but I believe a lot of bears are a bit too smart to fall for the audio loop an electronic call plays. For that reason, I prefer the hand call. With it, you can pour much more emotion into your calling and really convince that bear something is perishing. Think of it like playing an instrument.

Where Should I Call?

As far as where to call goes, that is only gonna be answered by getting your boots dirty and scouting for some bear sign and bear country. If going in blind though, I’d focus in moist canyons that are rather dense. You want the bear to have to come check out the noise, not see you from 400 yards away calling in open country. 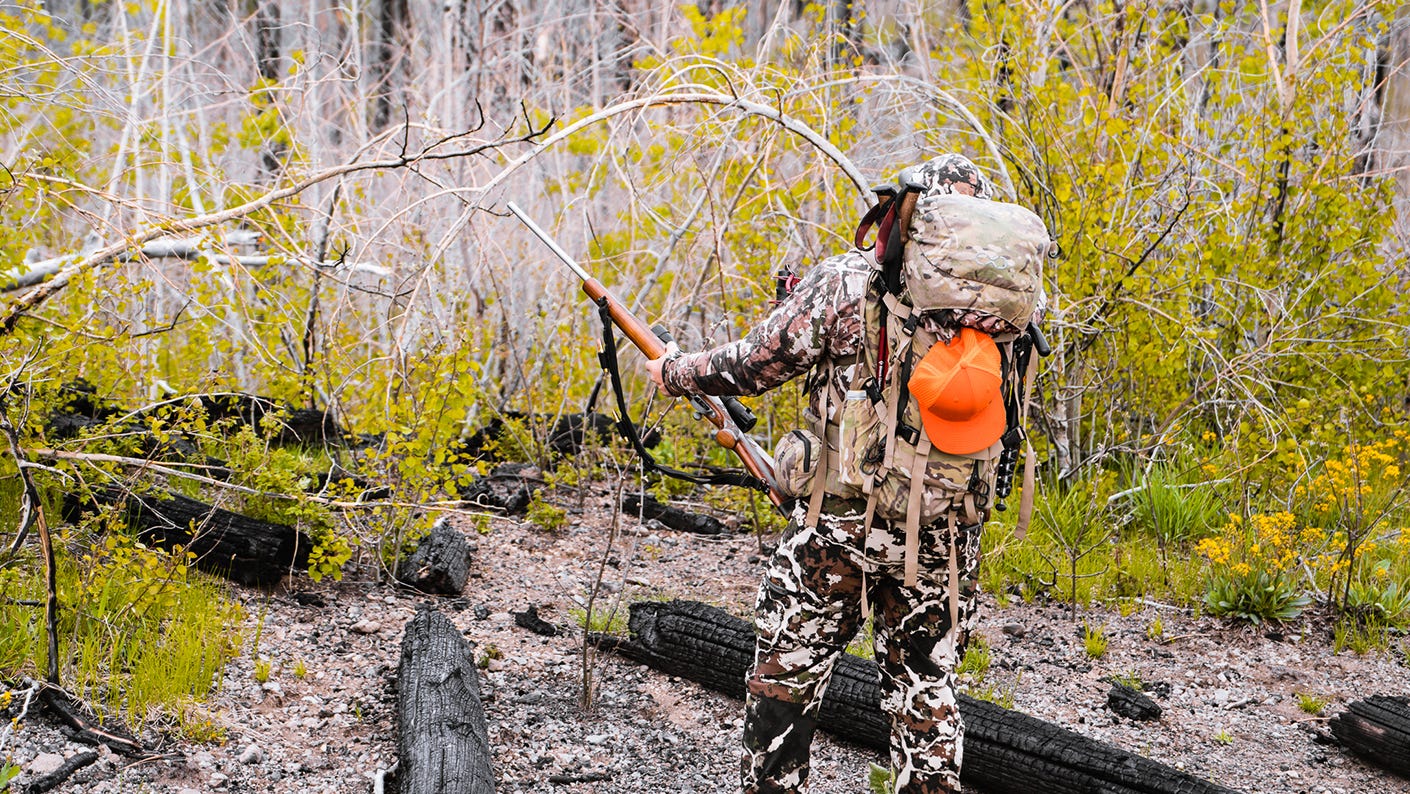 Because of that, I like to set up on small rises above the bottoms of a canyon. This will make the bear have to come up the hill to see you, hopefully offering a shot. Have your head on a swivel though, because they can come from any direction, and sometimes fast. Try to put your back up against something like a boulder or tree. If calling with a partner, a good thing to do is sit back- to -back while calling.

Once you find out where to call, it’s time to start singing. I like to start out subtle and build from there. This is the route I take, just in case there happens to be a bear close by when I start. Bears have a short attention span, so plan on calling for quite a while at each stand you make. I’m talking 30-45 minutes of constant calling before thinking about moving. Of course, you can stop for a minute or two at a time to catch your breath, but don’t stop for long. If a bear is making their way to your call, you stop calling, and they find a bush full of berries, guess what? Yeah, they can be lazy and will likely get distracted by those berries. Calling a bear off food they already have is difficult. Think about it. Why should they come to you when they’ve already got food right where they are? Best not to mess with it and just keep the track rolling. Do these 30-45 minute stands throughout the day. Focus in or around feeding areas in the morning/evening and then move to the edges of bedding midday.

I couldn’t believe my eyes as I watched the bear cut the distance between us effortlessly. In no time at all, black fur was filling in the gaps through the trees beneath me. My rangefinder read 40 yards. With my release clipped on, I could see an opening towards where the bear was heading. A path right to where I was. Just as I was about to draw back my bow, my wind made it to him before my arrow could even try. That bear bounded out of my life, but still resides in my memory bank and will for some time. 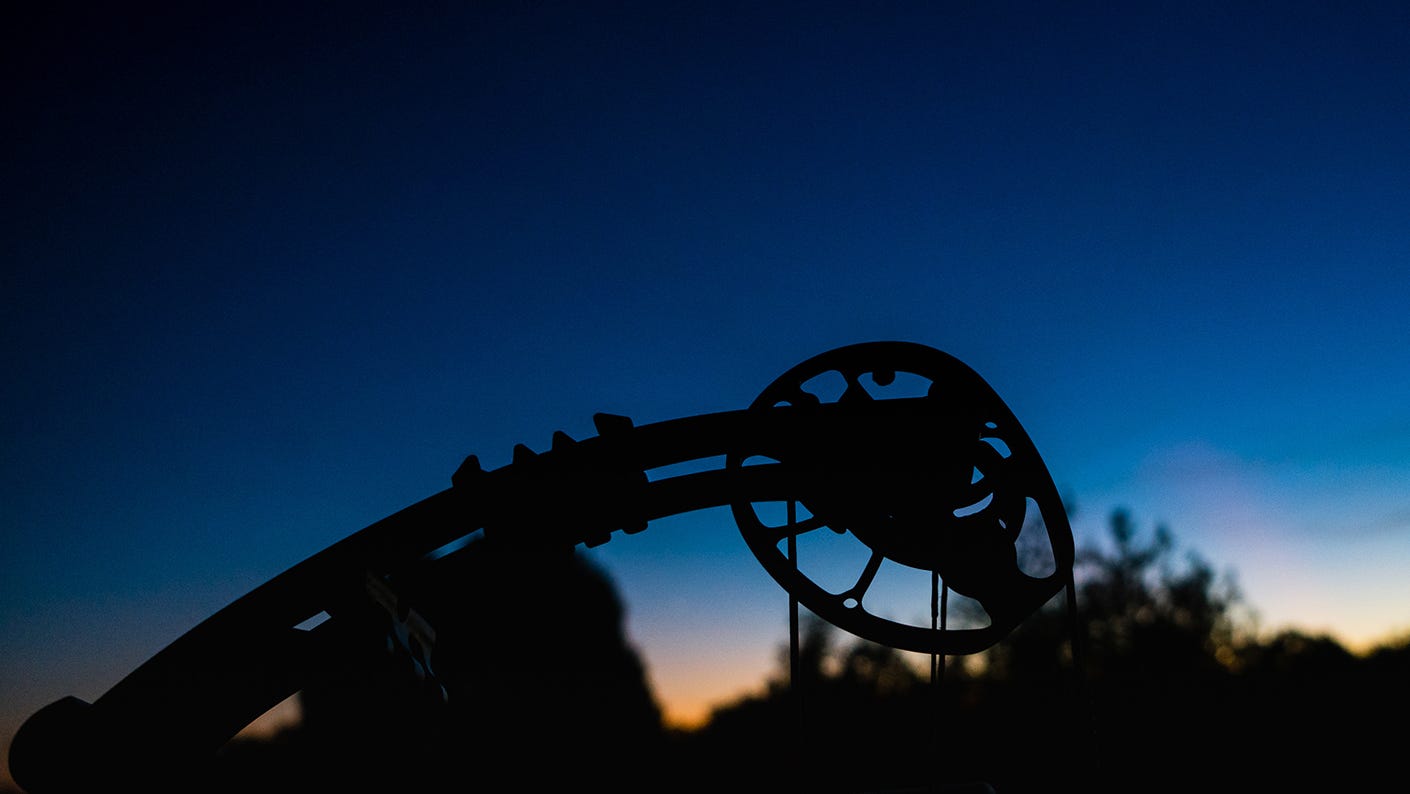 That right there is why I love predator calling for bears. It offers an experience like no other. The kind that live with you for a while. In the lonely hike back to the truck guided by my headlamp I smiled. “Next time bear. Next time.”

Josh Kirchner is an outdoor writer and avid backcountry bowhunter living in the southwest deserts of Arizona. He loves inspiring other people to chase their goals and embrace the whole experience that comes with hunting. His favorite adventure partner is his wife. When we are not exploring the mountains, we are spending time with our two herding dogs and mischievous cat. Read more at http://dialedinhunter.com. Instagram: @dialedinhunter